Melting Mama - BBGC - Bariatric Bad Girl
*whispers*
Out of the mouths of brats: 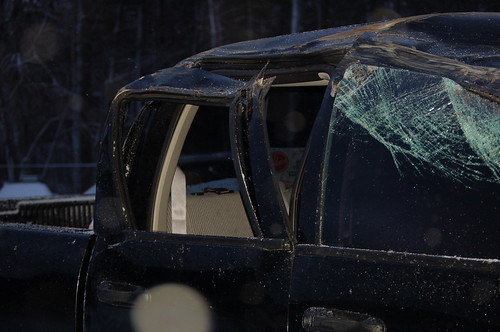 The insurance company "totaled" the truck.  Now please hope that things work out that I can get another good vehicle.  The bank note will be paid first, and then they cut us a check for the remainder of it's worth.  This was a 2006 Dodge Ram 2500 5.7L, but a very standard version. (Beth doesn't really know cars, so deal with my description.)  She's (the truck was a girl) a goner now.

I forgot to grab the air freshener.  It was my favorite, even with no smell.  It read:  "Loose, fast and out of control," with a retro woman smoking a cigarette.  Well, in the end it was out of control, but, sort of slow.

I took Bob by the yard today where I went off the road, and he was all, "What. The. Hell?  I thought you said you got stuck on a rock-wall!?"  I did - but - the wall was a decorative retaining wall that happened to be a few feet from a house, which was also about 75 feet from the road I spun off of.  As we looked at the yard, we realized that I was really lucky, considering I missed crashing full-force into three stationary objects, first I killed a big evergreen tree, then, I hit the oak tree and kept sliding, and ended up on TOP of the rock wall.

We went to remove the plates and check the truck for any leftover personal belongings, and the bags of missing grocery items I still can't find.  I don't know how we lost several bags of food and household stuff, but it pisses me off because I spent $280.00 that day on prescriptions, food, baby stuff and non-perishable things, and I've lost about $100.00 worth of items between the crash - moving things to another vehicle and here.  Someone told me to itemize the losses for the insurer - but the insurance company told me to stuff it - they don't cover personal property.  Whatever, it's no biggie, I just hate that I lost this stuff, I paid for it with my own money, damn it!

Anyhow - I do not know how long this part takes, paying the bank, releasing the title - and getting money towards another vehicle.  I still need a car large enough to tote around myself and four kids at the minimum, and ultimately to fit two adults, four kids and $250.00 worth of groceries at times.  The truck was just big enough with the quad cab to do just that, but I hated the wasted space of the bed, which we never used, except while camping.  I DESPISE mini-vans, and would prefer to never see one again, but - of course they have the seating part covered.  I would prefer something heavy-duty again, with enough seating for everybody that used less gas, but doesn't make us feel like clowns stuffed in a clown car.  A hybrid, would be ultimate, you know, if I had $40,000 growing out of my butt.