A couples survey, I lifted from www.dooce.com

What are your middle names?
Lynn + Joel.

How long have you been together?
Longer than humanly possible.  We started dating in freshman year of high school - 1993. 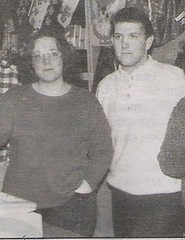 (A newspaper photo from Sophomore year.  We were in DECA together.)

How long did you know each other before you started dating?
He was in my Algebra class, I knew him vaguely since September, and he asked me out in April.

Who asked whom out?
Oh.  Just answered that.

How old are each of you?
I am 30, he is going on 32.  He stayed back in elementary school once (he says it was because he had a hearing problem and couldn't hear the teacher, he still has a hearing issue, it's pretty bad) and I started school young, at age 4. 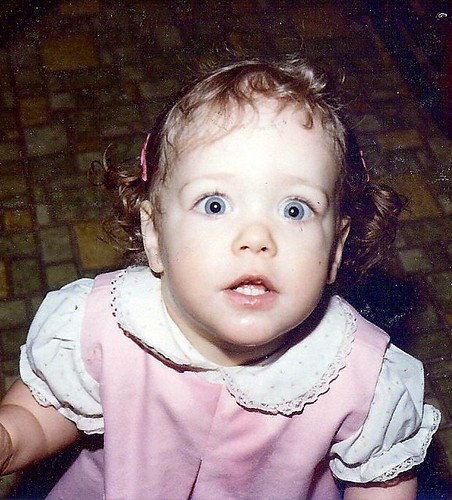 Whose siblings do you see the most?
His, they babysit for us, and he's got three sibs.  I only have one, a brother, who would implode if we asked him to sit.

Which situation is the hardest on you as a couple?
It's always been money.  We've been on our own since age 18, and had babies early, so money has always been elusive, overwhelming and stressful.  It doesn't change even even if you make more.  We're still trying to make it.

Did you go to the same school?
Yep. 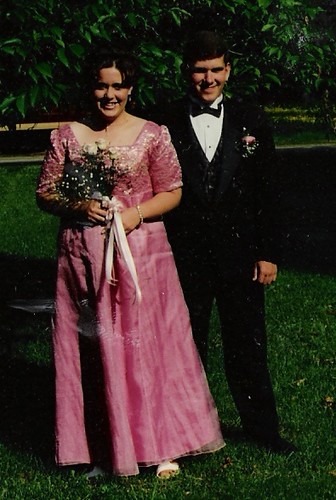 Are you from the same home town?
Nope.  We had a regional high school.

We both have had IQ testing.  I won.  However, I ask him for help ALL THE TIME.  I have serious troubles with basic things sometimes.  It's cahhh-razy.

Who is the most sensitive?
I wouldn't call it sensitive.

Where do you eat out most as a couple?
What is this thing you call eating out?  We don't get out much -- if and when we do -- it ends up being quick-serve something or other because we don't EAT much.  I always ask for Chinese, Thai, etc...

Where is the furthest you two have traveled together as a couple?
Together?  Orlando.  Mickey Mecca.  He's been to Scotland/England.

Who has the craziest exes?
Um.  We don't really have many exes -- since dating so young.  But, I would say I do.

Who has the worst temper?

I would say he does, he would say I do.  He is easily irritated, and I am moody.

Who does the cooking?
Me, mostly.  He will cook when he craves something - aka FUDGE, etc.  because I refuse to make it.

Who is the neat-freak?
Me.  But, when he's on a mission - he will clean things obsessively - like the walls.  We have a toddler who colors on the walls in hiding when she finds a writing implement.  He freaks out.

Who is more stubborn?
He, like an ox.  But I am super-stubborn also.

Who hogs the bed?
Me.  I sleep like a starfish, but we also have a kid in the bed most nights.

Who wakes up earlier?
Meh.  We are equal - since three kids have to be up and to school - and he goes to work.

Where was your first date?
To the movies and out for DONUTS.  LOL.  His aunt drove us, and we went out after for donuts.  I should have seen it coming.

How long did it take to get serious?
We were engaged in December just after high school.

Who eats more?
We're both RNY Gastric Bypass'ed -- it's pretty even.  I can eat more in quantity than he can -- but he eats more overall.  He can take in more calories.

Who does the laundry?
I do.  He does not separate well - and things get icky.  While I was in the hospital last week he took over -- and now my white towels aren't really white.  But he will do it if asked or if I'm unavailable.

Who's better with the computer?
Him, overall, but we have two iMacs and neither really has used them to capacity yet.  I have no clue about most of the programs.

Who drives when you are together?
Him.  I do not drive any more, due to my seizures.  I have six months (again) before I can consider getting behind the wheel.

Feel free to answer some or all of the same questions about your significant other in the comments, or leave a link to your website if you prefer answering there.