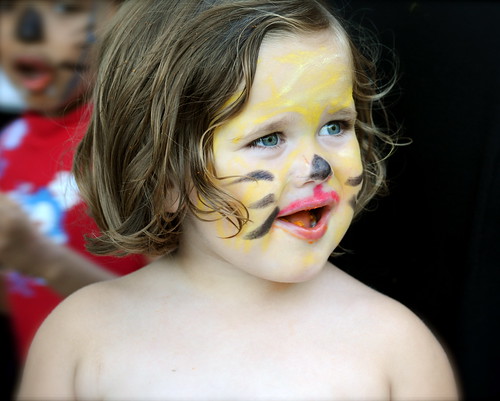 Welcome to Monday.  RAARRR!  (This is what happens when a kid pulls out the face crayons during a cookout.  The seven year old did her own work, and it took three baths to remove her "look.")

I get apprehensive when I read all the social networking updates from people , they write:

I am over here musing, "It's just another day, they are pretty much all the same, no?"

There are a few who start with a positive quote, or so-positive-it-must-be-faked sentiment, but mostly, they are just "blah."  Positive people seem like the ones that might be financially secure, and/or not at work.  Does the money or security give the positivity?  Maybe sometimes, but some are inherently always positive or spiritual or Lovin' Jesus.

Does anyone out there actually like their job?  I guess I just assume nobody does.  I remind myself of that when I think about being at home and NOT working.

What would I be doing if I was working right now?  Likely something I would not enjoy!  It's true -- I'd likely be working as low girl on the totem pole in some retail establishment trying to sell you into another credit card You Do Not Need because I might get $3 per credit application submitted.  (Do stores still do that?)  Mostly because it's what I could apply for and actually land with my blank resume.  If I want to push further, I see that I will needs me some edumahkayshun.  For what, I don't know, and I don't know that it's worth $20K a year in costs to get there and be in serious debt, and there's no way I'll get financed to GO to school anyway.  So that's where I'm at.

Most people don't get the opportunity -- or don't attempt to because it's just not feasible or they think it's not -- get into a field they actually want to work in.

I look at Mr. and think about that often.  He never said he wanted to run a bank.  He wanted to be a cop.  I know that.  He's taking college courses, but in business, not criminal justice, because business makes sense to what he's doing right now, and because it's what tuition reimbursement PAYS for.  He's also likely a certified EMT (waiting on the test results) and that might give him enough blood and guts fun.

Why didn't he become a cop?  He was too fat initially, and even before that, (since his super preemie birth) he has pretty significant hearing loss that also got him out of joining the freaking ARMY.  THANK DOG. While I am not thrilled with repeating myself tentwentytimesaday, his ass would have been sent to the Middle East had he not been disqualified.   He was working with a recruiter at/about the same time as getting into college, and ended up a Dad to my nearly 12 year old daughter and stayed home to work in the end <insert years span here> and now counts money for a living, and it's likely he'll do this type of work until retirement.  It suits him somehow.  I envision him sitting at a desk -- like Scrooge McDuck -- as an old man. I do.  Even though the technology will completely envelope the banking world, I see him, sitting at a desk watching it.  LOL.

See how that works out?  I know, right?  Does not seem AT ALL the type to apprehend criminals -- nor head into a WAR ZONE -- banking is fine thankyouverymuch.  However -- you see how that happens?  Misdirected.  Life.  It happens.

Are you doing what you wanted to do?  What would it take to actually DO it?  What obstacles are in your way?

I know, I know... I am writing this as much for me as you guys, I haven't figured it out yet, I'm just seeing it from this side wondering why everyone is m i s e r a b l e and what to do to avoid that.  I suppose if I sit here and ramble on enough about it, an answer will drop out of the sky and land in my lap. ;)