Melting Mama - BBGC - Bariatric Bad Girl
I probably should have INTRODUCED...
Probably my most favorite EVER.

One out of five moms to be are OBESE when they become pregnant.  O-o 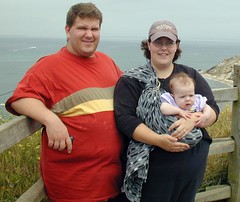 Present company included.  I was obese FOUR OUT OF FOUR TIMES, even AFTER BARIATRIC SURGERY!  Go me.  I weighed in at 175-185 at my first prenatal visit with Tristan in 2006, after losing 170 lbs and regain some weight back.  In fact, when I miscarried, I was "of normal weight."  By body likes to carry babies when I am FAT.

But, being obese + pregnant is NOT recommended.  It's risky.

About one in five women are obese when they become pregnant, meaning they have a body mass index of at least 30, as would a 5-foot-5 woman weighing 180 pounds, according to researchers with the federal Centers for Disease Control and Prevention. And medical evidence suggests that obesity might be contributing to record-high rates of Caesarean sections and leading to more birth defects and deaths for mothers and babies.

Hospitals, especially in poor neighborhoods, have been forced to adjust.

They are buying longer surgical instruments, more sophisticated fetal testing machines and bigger beds. They are holding sensitivity training for staff members and counseling women about losing weight, or even having bariatric surgery, before they become pregnant.

Studies have shown that babies born to obese women are nearly three times as likely to die within the first month of birth than women of normal weight, and that obese women are almost twice as likely to have a stillbirth. About two out of three maternal deaths in New York State from 2003 to 2005 were associated with maternal obesity, according to the state-sponsored Safe Motherhood Initiative, which is analyzing more recent data. Obese women are also more likely to have high blood pressure, diabetes, anesthesia complications, hemorrhage, blood clots and strokes during pregnancy and childbirth, data shows.