Extremely obese women may not need to gain as much weight during pregnancy as current guidelines suggest, according to a new study presented today at the Society for Maternal-Fetal Medicine annual meeting. (February 14, 2011)

I have been pregnant as a morbidly obese woman three times, and once as an obese woman.  Each time I was counseled to "not worry" about weight gain, or to "only gain 15 pounds."

Let's not discuss what I actually did. 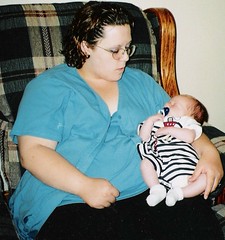 Regardless of the suggestions, I failed to listen, and ate my way through pregnancies 1-4.

Even with severe morning sickness through much of all of the pregnancies, I used this as an excuse to live on bags of oyster crackers.  "I'm eating for two."

The advice now for super obese women -- you don't need to gain anything.

Severely obese women who gained less than the recommended amount of weight during the second and third trimester of pregnancy suffered no ill effects, nor did their babies. In contrast, obese and non-obese women who gained less weight in the second and third trimester had undesirable outcomes, including a higher likelihood of delivering a baby that is small for gestational age - smaller than the usual weight for the number of weeks of pregnancy.

"The study suggests that even the recommended amounts of weight gain might be more than is needed for the most obese women," said Eva Pressman, M.D., director of Maternal Fetal Medicine at the University of Rochester Medical Center.

In 2009, the Institute of Medicine released new guidelines for how much weight a woman should gain during pregnancy, taking into account changes in the population, particularly the increase in the number of women of childbearing age who are overweight and obese.

"At some point, there may be even more tailored guidelines than what exists right now for women with different levels of obesity," said Danielle Durie, M.D., M.P.H, lead study author from the Department of Obstetrics and Gynecology at the Medical Center.

The study sought to determine the impact of weight gain outside recommended ranges during the second and third trimester of pregnancy on women and their babies. Women were grouped according to pre-pregnancy body mass index (BMI) as underweight, normal weight, overweight, and obese classes I, II, and III. Obese classes II and III include women considered severely and morbidly obese.

Newborns that are very large or very small may experience problems during delivery and afterwards. Small babies may have decreased oxygen levels, low blood sugar and difficulty maintaining a normal body temperature. Large babies often make delivery more difficult and may result in the need for a cesarean delivery, which increases the risk of infection, respiratory complications, the need for additional surgeries and results in longer recovery times for the mother.

In addition to weight gain rates outside the recommended ranges, increasing BMI alone was associated with negative outcomes for mothers and newborns as well. For all BMI groups above normal weight, the likelihood of cesarean delivery, induction of labor and gestational diabetes increased.

The study included 73,977 women who gave birth to a single child in the Finger Lakes Region of New York between January 2004 and December 2008. Of the study participants, 4 percent were underweight, 48 percent normal weight, 24 percent overweight and 24 percent obese (13 percent class I, 6 percent class II and 5 percent class III).

Researchers from Rochester also reported that overweight and obese women undergoing labor induction may benefit from higher doses of oxytocin, a medication used to induce labor by causing contractions. They tested the effectiveness of two oxytocin protocols - one including a lower dose every 45 minutes and another using a slightly higher dose every half hour - in women based on BMI.

"If you give more oxytocin to overweight and obese patients they may be more likely to delivery vaginally, which is what we want, as opposed to having a cesarean section, which can introduce more complications," according to Pressman, an author of the study. "The study is important because the effect of BMI on induction has not been well described before."

The oxytocin protocols tested in the study are relatively standard and were used to induce labor in nearly 500 women who delivered at the University of Rochester Medical Center between October 2007 and September 2008. Study participants were induced for a variety of reasons, including going a week or more past the estimated due date, when there is no longer any benefit to the fetus from remaining inside the womb.