Melting Mama  I'm writing a blog post about the cruise, and I insert a photo of Mr + I from our first cruise in 1999. My five year old says to Mr, "Mama gotted married to you, and got us, that's why she got big... but so why did you be so fat?" Oh. dear.

Kids.  They are honest. 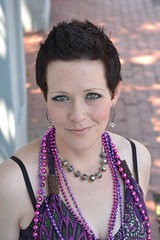 It's been that many years since I went on an actual away-from-everything vacation with the Mr.  I didn't really consider it before now, but we haven't been anywhere without kids since then, aside from one quick jaunt to Long Island last fall for another OH Event.  The kids have been on vacation with family, he and the kids have also been on vacation, but he and I have not.

We went on a Carribean cruise for our honeymoon in 1999.  Of course at that time we were the parents of a 1.5 year old and a five month old and it was all very overwhelming but it was... fun?  I hesistate, because... my only real memory of it is getting very sick with a stomach virus.  Hitting up the ER in the islands is "A Lot Of Fun?"  Also, maybe something about falling off of a Seadoo.  Sharkbait.

I am not dredging up those details right now, (even if my mind just went there...Sharkbait...) because I'm leaving in four hours headed to Fort Lauderdale to become Sharkbait...

We are going old-school and driving to the port in Fort Lauderdale.  Partly because apparently during spring break time, airfares are hugely inflated -- and because someone who might be driving might no admit to being anxious about flying.  Clearly he has not flown with ME since 1999 <insert sedatives here>

Spanx Powersuits - at Target - approximately $30 - You know I'll be covering up. LOL

It's not all sun and sea (and sunburns) we'll spend time learning and sharing and trying products with our WLS friends!

No, REALLY, I SWEARS IT.

I mean it.  Products from all sorts of super sponsors have *hopefully* made their way to Florida to get on the big boat!   Yours truly will be doing some live product tasting and testing.    Thanks to many of the following sponsors for sending goodies to the boat... including some of my own wicked awesome MM Sponsors -

It's a super time for my house to spring a pipe leak (plumber is scheduled, but could it have worse timing as I am packing up the car?!) and for other stresses to amp up because guess what -- I'm going knee deep in the water somewhere.   And, hopefully, we're not describing my basement in approximately a week.