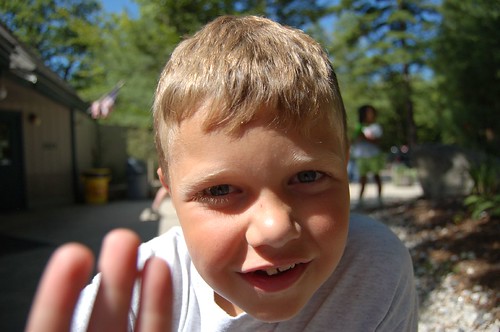 My son is obsessive about being in control of the remote control for the television.  This isn't just here at home, he'll try to gain domination over anyone's remote.  If you can't find the remote - he's probably placed it in his bed, generally under the pillow, safely tucked in.  Most times, we're stuck watching Power Rangers S.T.D. ("It's S PEE Dee, Mama!" until he digs the remote out of a hiding place, I find it, or we shut down everything until he brings it back and nobody watches anything.  He'll record every episode of the chlamydia crew onto TIVO and then watch and rewind during the shows, so we're seeing a lot more Power Rangers than we need to.  I don't know where he got the idea that he's the King of the Remote - maybe it's because he's the only boy here and the girls have allowed him to do it for so long? 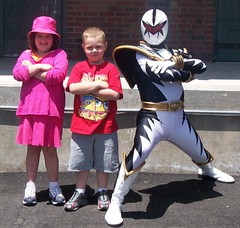 So this morning, I've been trapped on CBN.  How CBN got on my screen, I'll never know.  Maybe it was the healin' power of Jeebus comin' through the screen to touch me.

Turns out the kid didn't hide the remote.  He walked away, got involved in something else, I didn't see the remote right away, waited for him to come back since I wasn't actively listening anyway. (I was making breakfast and fiddling around)  Then came a point, I just couldn't take it anymore.  For $20.00, I too, could help.  When the 700 Club first came on - I didn't really know what it was, it sounded a lot like a news program, which I wouldn't mind watching, normally.

I watched a story about a high school valedictorian who had the mic shut off because she started spewing about how Jesus got her where she is today.  From CBN:

"Valedictorian Brittany McComb is on stage to deliver a speech, which highlights God's influence in her life. But when she tries to mention how Jesus Christ died on the cross for our sins, all of a sudden her microphone goes dead.

Is it a faulty outlet? A power surge? No, the school pulled the plug...literally!

John Whitehead heads the legal organization representing McComb. He said, "She had the microphone pulled, something that only happens in totalitarian regimes."

McComb knew the microphone would be shut off because she had to submit a copy of her speech to the school. They warned her not to read her version or they would cut off her microphone.

CBN News obtained a copy of the speech. The school cut out this part: "God's love is so great that He gave His only Son up to an excruciating death on a cross so His blood would cover all our shortcomings, and our relationship with Him could be restoredâ¦" They cited that as 'identifying a particular religion."

They also didn't like the part where she wrote "that is why Christ died." They also crossed out a part where they believed she was proselytizing. She wrote: "I can guarantee 100 percent, no doubt in my mind, that if you choose to fill yourself with God's love rather than the things society tells us will satisfy us, you will find success, you will find your self-worth."

Thanks, I'll keep that in mind, but for now, don't do that in a public school setting, mmkay?

Anyways - we're safely away from the Bible Network and back to the loving arms of Nickelodeon where we belong, so it's all good.

But, before I go back to the Fairly Oddparents, perhaps?!

Who was obviously so not the valedictorian.