The truth hurts, doesn't it?  From this week's Postsecret.

Postsecret freaks me the fck out.

I see somebody's mom in bed with a pint of Ben & Jerry's and hiding it so the kids don't know.  Yeah, we're all screwed up, I know.  I don't even buy ice cream, not even sugar-free diet shit, okay sometimes, but it's usually just popsicles that sit and freezer burn because WHO EATS THIS CRAP?! What say YOU?  Do you echo this?

I might be in the minority.  I don't "think" I think this way.

This secret is from this week's Postsecret. 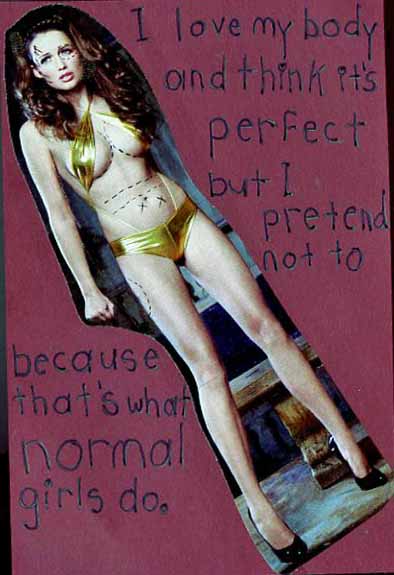 From this weeks' PostSecret: Fat Cow. Check out your Weighty Secrets, too.

From this week's PostSecret: Teacher. 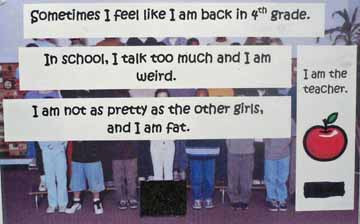 From this week's Postsecret: Purge. If this is motivation for someone//anyone out there, I don't know what is.

Remember the photos this woman posted on Obesity Help?  (And, everyone freaked?)  Well, she's confessed to why she is so very small + sick.  She says she's anorexic, bulimic and bi-pol@r.  Well, damn.

Do we understand why the pre-operative psychological testing should be much more thorough?

That telltale sound of a aerosol whip cream can.

The telltale sound tells on you, and you can't hide that sneaked snack.  Even the baby knows the sound, and will turn her head and salivate on cue.  I guess this means we've had too many sneaks of the whip-cream.  I've always had a love for whip-cream, and in my former life, Cool-Whip from the tub.  Nearly three point five years after being alternatively routed of the digestion, most of the sneaky snacks have drastically changed, except for the whip-cream right out of the can.

I have traded Reeses' Peanut Butter Cups for Protein Wafers, and a bag of fried cheese puffs for a flaxseed tortilla with melted cheese.  This is for life.  I cannot ever go back to eating that way.  On the occasions that I decide that I want to be "normal for just a ****ing minute, and I'm going to eat whatever the hell I feel like it" - I have the alternatively routed digestion telling me, "Not a chance. Take this, idiot."

Rewind to the former me.  Rewind to the former (or soon-to-be former) you, too.  Going way back, thinking about the things I would ingest - at all ages - the bizarre yet not so bizarre cravings.  Here's my not entirely conclusive list of foods eaten just, well, because.

Keep in mind, as a child, I really wasn't hugely fat - just always overweight and pushing obese until I got pregnant the first time.  But, I was obsessed with sugar and snacks.  Carbohydrates have always been my intense craving and adversary.

Here is my list, things I'd obsess about and eat as a child, and many later as a young adult:

After we moved out of my mom's house ten years ago, I got considerably fatter, but I didn't really snack on any odd things, it moved on to lots of homemade comfort foods, and way more cheap take-out than is necessary.  We ate a lot of McDonalds' dinners, (his first few jobs were fast-food management, a steak place, pizza shop and a McD's for a few months) subs, fries, pizzas, and pu pu platters.

Now, my how things have changed.  My eating habits seem much more bizarre now, to normal people, I am sure, because I eat like a semi-health freak with a fat girl stuck in her head. 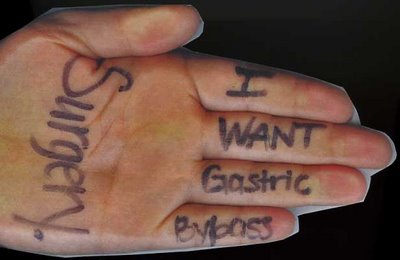 "I am not even three weeks out and I have tried bites of beef, salmon, shaved turkey, crab legs--which made me throw up all night--and pork. I was trying to see what my body could tolerate after the surgery. Now keep in mind that I am educated and consider myself quite intelligent....although these actions do not demonstrate that. Eventually I got scared and called the nurse and confessed. She said I was non-compliant at this point and that it was quite possible that I had stretched my pouch. Quite naturally I began to cry...I felt like the biggest loser on the planet earth. I swore I was going to be the model patient and that WLS was going to work for me. I was down in the dumps...and had secret fears that this too would be a failure for me and that if this didn't work I would just kill myself. But then I realized that all i had to do was begin to weigh and measure my food, stick to the protocol and become compliant, which I have done. Someone told me "just because you can eat it doesn't mean you should eat it!" and that is sooooooooo true. I now feel quite optimistic, I have lost 21 pounds since june 8th and I am praying for the ability to remain compliant on a daily basis. My addiction with food is not over....I see that. I will have to work just as hard as I did when I lost massive amounts of weight in the past...that is surely evident. I hadn't even posted here because I felt ashamed of my behavior. But experience in 12 step food programs have taught me that I need to face my secrets, admit them, and correct my actions. That is the purpose of this post."

Um, okay.  At three weeks, breaking "the rules" all over the place.

Hell, I Am A Rule-Breaker, and I didn't start until many months to one year post-operatively. She'll be with me, back at 300-sumpin' pounds, and we can eat ice cream together.   Wait, going back and reading this again, she's semi-suicidal, no?  Sorry, 'bout that.

From this week's Postsecret: 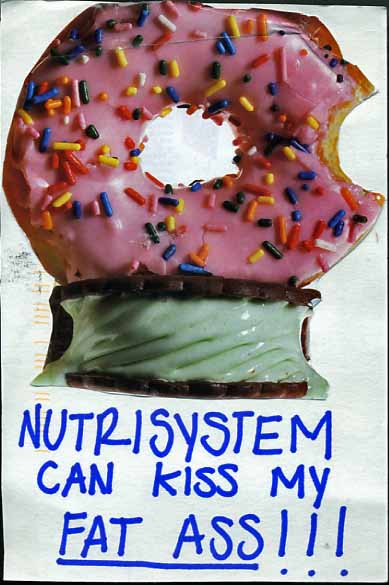 I loved you while we were together.  I wish you didn't cost three-quarters a mortgage payment, because, I'd have a replacement for you already.  But, I'll wait for you.  I've even added a Tip Jar on the request of a reader.  Soon, you will be in my arms again. I have decided that if I can fund a new camera, I'll learn to really use it this time around, and make it worth the cost.  I'll take wedding photos, kids portraits, anything to validate your cost.

Update - We Have Insurance Coverage!  I knew it!  I'm bringing her in for service/replacement.  The kicker, it can take eight weeks.  No summer photos.  ARGH. From this week's PostSecret: Bother. From This Weeks' Postsecret: Mom. And, a little reminder that folks are waiting for your Weighty Secrets.

Come on.  I know you have dirt.  Send it to me - anonymously.

Make a fake address - keep reusing it if you have to.  I can't tell who you are.  The secrets get posted there. 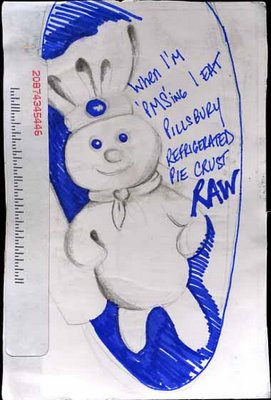 Go that way Go this way